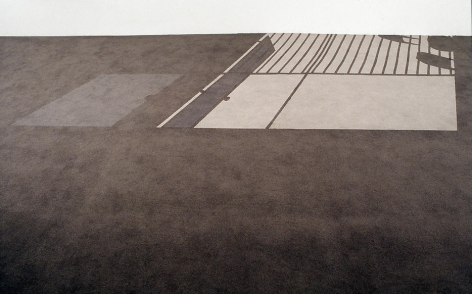 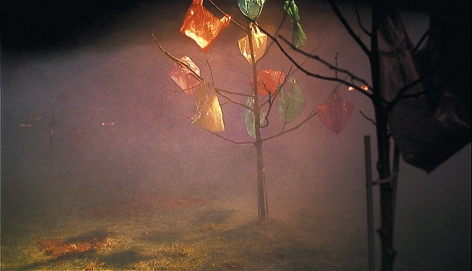 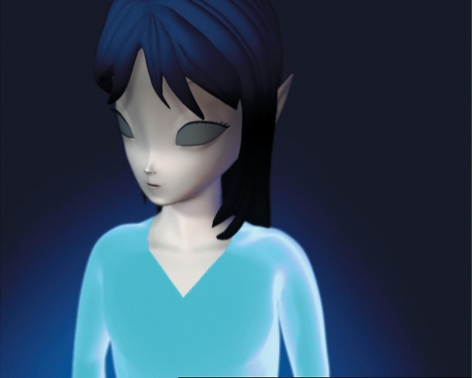 Friedrich Petzel Gallery is pleased to announce the first New York solo exhibition by Paris based artist Philippe Parreno. One Thousand Pictures Falling from One Thousand Walls, consists of two video installations, Credits 2000 and Anywhere Out of the World 1999 and a carpet inlay that draws the projection of sounds on the floor.

Credits suggest an urban landscape and the play areas of housing projects built during the 1970s in France. Credits begins with a dark screen from which the image of bare trees with brightly colored plastic bags fluttering from their empty branches slowly emerges. Apartment buildings appear in the distance. The scene is never viewed in daylight. Playing in the background of this artificial landscape is a piercing guitar riff by Angus Young. At the end, when the movie fades to the black, the gallery lights go on revealing a picture of a young boy named Gerard Philippe, photographed by Inez van Lamsweerde and Vinoodh Matadin.

Credits is the results of a large collaboration of artists, technicians and a series of personalities who were influential during the 1970s, such as Angus Young, the lead guitarist of AC/DC; Alain Peyrfitte, the former French Minister of the Interior in the Charles de Gaulle cabinet, and MIKO an ice-cream maker. More specifically, this film is an investigation into the history of a type of housing project called Les Grands Ensembles, from the late 50s-60s. Credits was exhibited previously at the Walker Art Center in Minneapolis and the Centre Pompidou in Paris.

The second video installation is titled Anywhere Out of the World. Last year, Pierre Huyghe and Philippe Parreno bought the rights of Annlee, a Japanese Manga character. This collaborative project, titled No Ghost Just A Shell began with two episodes made respectively by the two artists. Anywhere Out of the World is Parreno's contribution, while Pierre Huyghe's contribution was exhibited at Marian Goodman Gallery in New York last fall. Throughout the four-minute video, Annlee talks frankly about her situation as a simple, empty commodity within the Japanese animation world. As a nameless figure, Annlee easily could have been disposed of and forgotten, but was "rescued" and given life.

One Thousand Pictures Falling From One Thousand Walls will be on view from April 7 through May 5, 2001. The opening will be on April 10 from 6-8pm. For further information, please contact the gallery at info@petzel.com, or call (212) 680-9467.