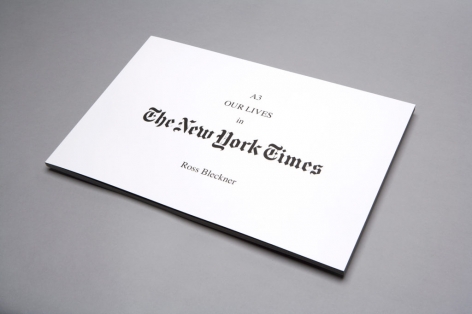 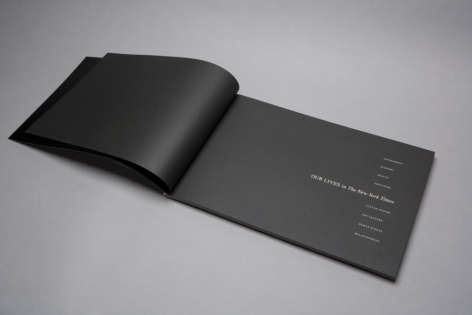 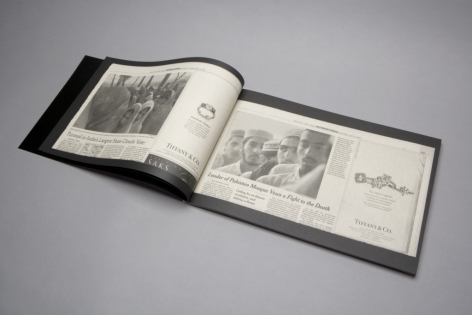 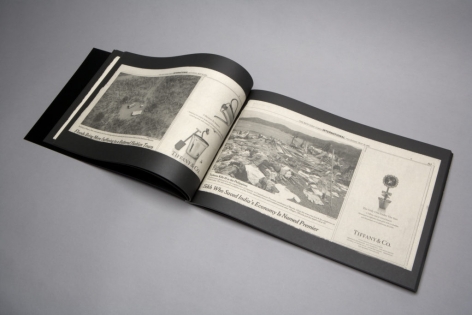 Every day, on page three of The New York Times, section A, an advert for Tiffany jewelry appears in the upper right corner of the page. Because of its placement in the paper's first news section, the advert generally appears alongside a major news story, most frequently an international disaster or tragedy of some kind. The effect of these juxtapositions, for those alert and lateral-minded enough to spy them, are variously humorous, tragic, tragicomic, ironic or subversive. Examples: an advert for a pair of Tiffany earrings is titled "Gold Rush"; to its left sits a photograph of a line of Palestinians at a cash machine, after Israel had begun to release frozen Palestianian Authority funds. An advert for a Tiffany bracelet bears the tagline "A Charmed Existence," and across from it the headline goes "Despite Embargo, Haiti's Rich Seem to Get Richer." An advert for four Tiffany rings bears the title "The Masterpieces of Engagement," and to its left, below an image of the president, is the headline "Obama chastises Wall St. in Push to Tighten Rules." For nearly 20 years, artist Ross Bleckner (born 1949) has been alert and lateral-minded enough to spy and collect these amazing conjunctions. A3: Our Lives in The New York Times reproduces a selection of 87 of Bleckner's finds in 1:1 scale. The bizarre synchronicities in this volume suggest a great deal about how we consciously and unconsciously process images every day.